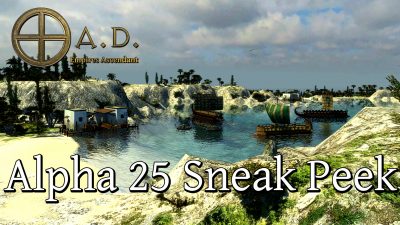 A provisional date of June 2021 has been proposed for the ‘Feature Freeze’ – the point at which new features for the upcoming Alpha version of 0 A.D. stop being added and the development team focus solidly on bugfixes. This is not the release date. The feature freeze is one of the precursors to release, with the specific launch date to follow. You can find more information here.

Be sure to tune into the Tom0AD live stream on YouTube on Friday 7th May 2021 at 9pm CET to see a preview of the latest development version of Alpha 25 in action. The broadcast will feature Tom and fellow YouTubers, Alistair Findlay, and Jim Cogan (0AD Newbie Rush) putting the dev version through its paces live on air. And there will also be a live Q&A session with 0 A.D. Developer, Stan`.

Following closely on the heels of Alpha 24, this latest iteration of 0 A.D. will look to further build on functionality and further expand the existing feature set while also fixing existing  bugs. With a shorter planned gap between alpha releases this time around, most of the proposed additions are subtle and geared toward small improvements in the current and future player experience rather than headline features. But there are a few notable things to look out for.

For a full list of all proposed features/changes visit the Alpha 25 Wiki page.

Get Involved! Your Chance to Name the New Alpha

Every new iteration of 0 A.D. gets a name, and this is your chance to contribute your suggestions. The Alpha 25 Name Suggestions thread on the 0 A.D. Community Forum has been open since January 2021, but there is still time to vote for your favourite and put forward your own suggestions.
0 A.D. release names start with the letter of the alphabet that corresponds to the release version. Alpha 22 was Venustas, Alpha 23 was Ken Wood, Alpha 24 was Xšayāršā, and Alpha 25 will start with a ‘Y’.
Check out the thread here.