This version is a maintenance release. Blocking bugs were fixed and security and legal issues were addressed. The gameplay remained untouched, and both versions of Alpha 23 are multiplayer-compatible; however we advise you to upgrade to benefit from the following fixes.

The team wishes to apologize for the delay in re-releasing. We have addressed other issues whenever we couldn’t make more progresses on the game itself, so the re-release has not been a completely negative procedure.

Download and installation instructions are available for Windows, Linux, and Mac OS X.

0 A.D. is free software. This means you are free to download, redistribute, modify and contribute to the application under the same licenses (GPL v2 or a later version for code and Creative Commons Attribution Share-Alike 3.0 for artwork, see license).

Although you might find some people selling copies of 0 A.D., either over the internet or on physical media, you will always have the option to download 0 A.D. completely gratis, directly from the developers. No “freemium” model, no in-game advertising, no catch.

During the Alpha 23 release, Transifex (our translation platform) had not updated a few resources, resulting in some localized in-game text relating to the Kushites not appearing in the game, despite the hard work of our translators. The missing strings now appear in the game.

The European General Data Protection Regulation (GDPR) came into effect on May 25th, 2018, just as we were releasing Alpha 23. We decided to take the bull by the horns and to continue working on the re-release by making 0 A.D. compliant and more secure.

All the sub-services that collect personal data from you now feature a Privacy Policy and updated Terms of Service and of Use. To continue playing the game, you will have to accept all future modifications of those policies. In a few days, we will release the Privacy Policies of our websites to make them GDPR-compliant as well. 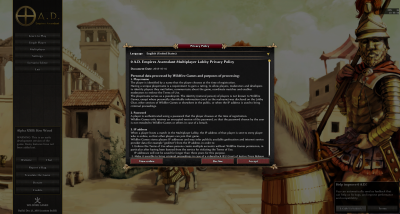 For more information, now and in the future, please see the related wiki page: https://trac.wildfiregames.com/wiki/UserDataProtection

Alpha 23 saw the launch of mod.io, a platform for hosting and sharing mods, which allowed us to build a mod downloader inside 0 A.D.

A few months later, this launch was a massive success! We went over the 10k downloads milestone, and at the time of writing, we are steadily headed towards the 50k one. We warmly thank the modders for their incredible work of making their mods work with A23, and uploading them to mod.io.

It is thanks to them and the players that 0 A.D. is #1 on the platform! Don’t hesitate to subscribe there if you want to receive notifications about new mods and secure our place on the platform.

The work is still in progress and can use every helping hand.

We are looking for programmers, especially those interested in improving our game engine (written in C++), and most notably its graphics pipeline. Javascript programmers are also welcome to help develop the game mechanisms.
Artists are always needed: in particular good animators and environment artists who could give our terrain textures a boost, and create more eye-candy.

You can also help with translating the game in your language at Transifex, by donating, or simply by spreading the word around you.

If you experience a technical problem with the game, please report it at trac.wildfiregames.com. This is also the first address to visit when you wish to dedicate some of your time to help patching the code.

Got any further questions or suggestions? Discuss them with other players and developers at the forum or talk with us directly in the IRC chat.

Contact info for press, bloggers, etc.: aviv@wildfireAETHIOPIAgames.com without the capitalized name Herodotus used to designate the Kingdom of Kush.