If you want to find out more about the development of this open-source, cross-platform real-time strategy game or if you are interested in game development in general, it might provide an interesting read.

If you want to be part of this project, feel free to visit our forums and join our active community, or just grab a task from our list of open tickets and get right to it. We are currently looking for Programmers, Translators, Historians, MapMakers, Animators and Artists. 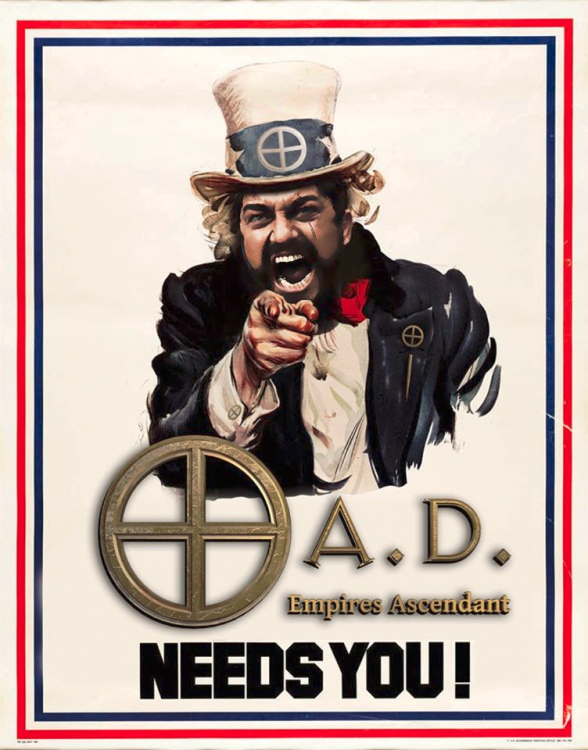 We have been working on improvements on performance, both graphical and non-graphical, to make the next Alpha run more smoothly.

The map editor will no longer be laggy (creation should not be hindered!)  when changing the height. You can also now search the entities in a non-strict manner, e.g. “units ptol hlr” would show “units/ptol_support_healer_a” in the list.

Flora has also been improved with better trees, and more variety in plants and props that can be placed over the maps in the scenario editor.

The bear and the baby elephants now have animations, and hippopotamuses can now be placed using the scenario editor.

Special artillery towers have been added to the game, as well as a new Gaul wonder and the Mausoleum at Halicarnassus.

New sounds for weapons and for some animals have been committed.

Work has been done towards improving gameplay to fix the current balancing issues with the help of  some of the best ranked lobby players and some modders.

17 languages have reached more than 90% of translation.

The whole team would like to welcome Angen as a new member. Angen has been an external contributor since the beginning of 2018 and has done a lot of work towards unit behaviour improvements. He is currently working on improvements on the formation system along with general unit behavior improvements.

Angen added the ability to allow cancelling trade routes. He committed some fixes for formations. He implemented the ability to display tools instead of weapons when units are approaching resources. He made the trade gain by garrisoned entities configurable which will allow for a finer balancing

bb has also been working on various smaller code fixes with the goal to improve consistency and to make unit templates cleaner and he fixed the lag that appears on windows when shift is pressed.

elexis committed a patch allowing for map specific placement in the GUI game setup page, continued working on the GUI rewrite and fixed some bugs. He implemented game-setup options for landscape and daytime and added morepreviously uncredited people to the credits. 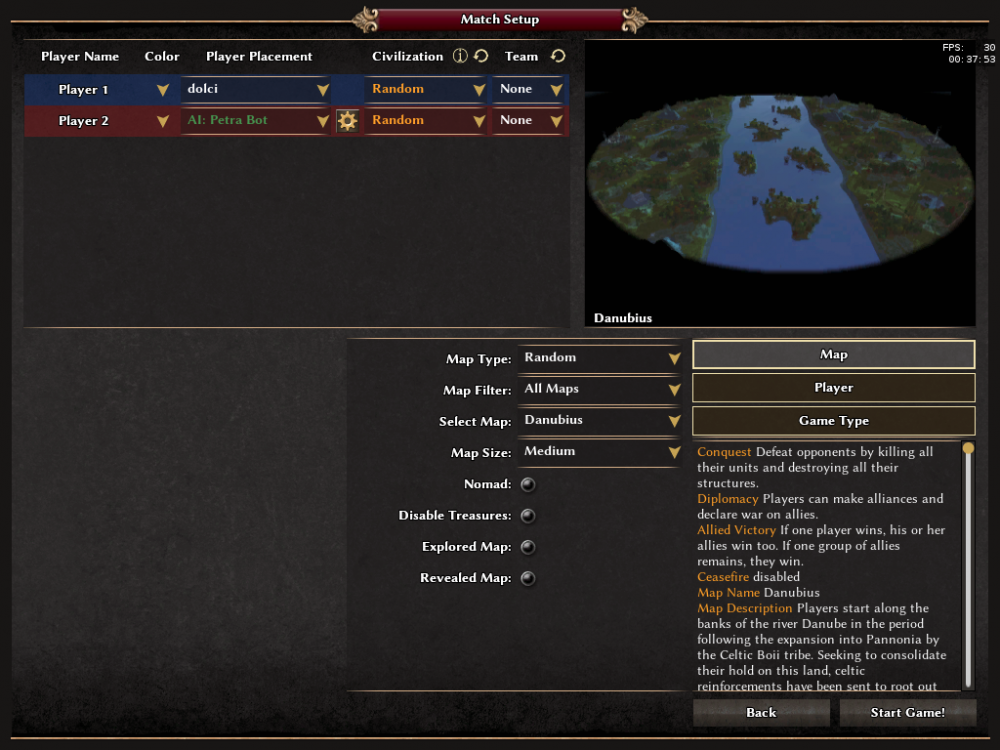 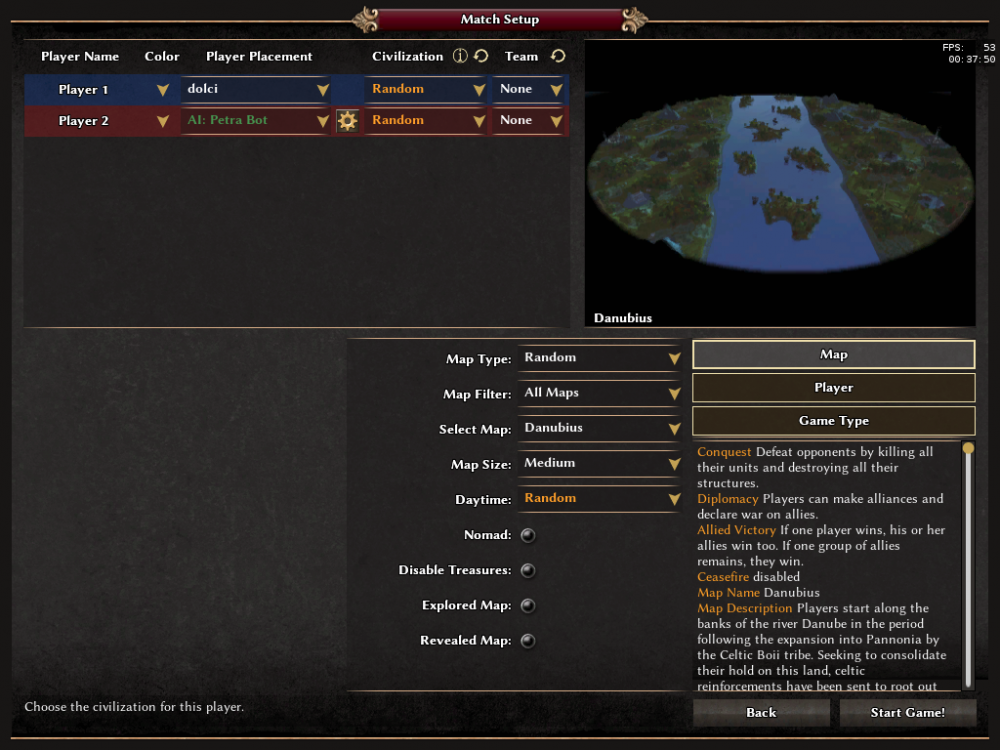 FeXoR and nani have been working on the procedural generation of maps, to allow for more realistic maps.

Freagarach made it possible for the same entity in multiple control groups (ctrl + number hotkeys). He allowed for status effects to affect unit speed (e.g. slowing down a unit when hit) this will be particularly useful for mods with magic. He also added a progress bar to show the upgrade status. Mods can now make projectiles deal friendly fire. This is currently unused in the game. He also allowed for some resources to not be barterable in the market, this will also be used in mods such as 0abc (link) and Delenda Est (link)

Imarok fixed an error warning with AMD CPUs, fixed the display of actions cursors over the minimap and the usage of the patrol action, and  did some cleanup in the minimap code.

Itms worked on some improvements to the continuous integration system. He also did some library updates for NVTT (NVIDIA Texture Tools), the library we use for our textures, with the help of adrian and s0600204 on a library called FMT (This library is used to print warnings and errors). He also worked on build fixes for Mac OS.

Krinkle worked on fixing JavaScript warnings, and submitted a few fixes for MacOS support, as well as some to improve the game’s CI.

linkmauve did some cleanup of the rendering engine, by removing old platform specific code which was either deprecated or superseded by SDL2, and worked towards improving multithreaded debugging.

Nescio has done a lot toward improving consistency in our files, renaming them to match the same conventions, and making them easier to deal with by simplifying some of them. For example all our map files had inconsistent naming conventions, and the presence of whitespaces in their name caused issues.

Stan has created a feature for mods to allow buildings to construct themselves without the need of units. He made some optimizations to the engine, and did some cleaning up of the code. He also improved the scripts that help artists check for mistakes, and made a Blender importer for game objects, reducing the amount of work it requires. He also added the ability to play visual animations when a building is upgrading, and when a tech is being researched. He is currently working with the help of OptimusShepard to fix an issue with recent AMD CPUs.  If you have Zen 2 CPU and want to help please head to this forum thread and tell us.

user1 and Dunedan are working on upgrading the lobby backend to be able to provide new features for the next Alphas.

vladislavbelov continued working on the rendering engine to bring improved performance and visuals. The next alpha will feature a FXAA filter, allowing models to look less jagged. He also worked on better tools to debug the renderer and easier access to those through the game. He added an option to use low quality shadows on more modest machines.
He also worked on the map editor, allowing it to save the panel size between each session so one does not have to resize them every time, and a non-strict search to the Atlas entity list. He is currently working with Stan to add an option to resize the map with a specific offset.

wraitii has worked on improving the engine, cleaning the code to make it easier to extend and to optimize. He has also been reviewing patches from Freagarach with aim to add gameplay features, such as status effects. Status effects will allow units to deal more realistic damage to others. For instance, it will allow flaming arrows to keep dealing burning damage after a unit has been hit.

Alexandermb added a Transversal Crested gallic centurion helmet, sheaths, new idle relax animations for the hoplite, and scutum shields. He also made some citizen animations for the slave and siege engine operators. Likewise, there are some new Gaul idles for swordsman and new pikeman attacking animations, new Roman republican and imperial shields, gladiator helmets, Celtic Carnyx, while he finished the bear animations, hippopotamus animations, worked on improving camel animations and gave more options to modders, new animations for siege engines and improved existing ones. He worked on improving the shield textures, allowed elephant turrets to attack by giving them an attack animation, and animated the baby elephant. 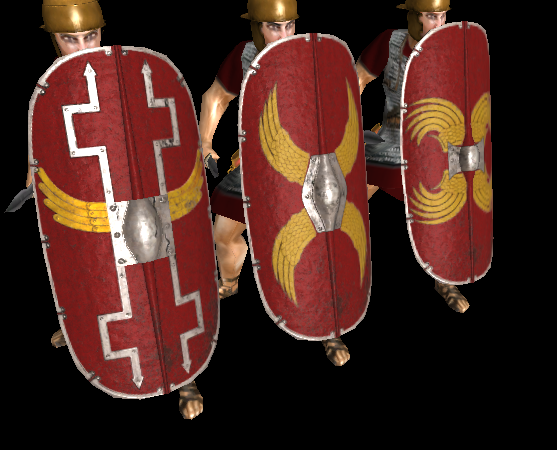 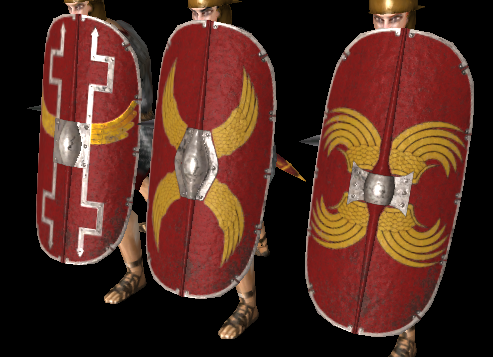 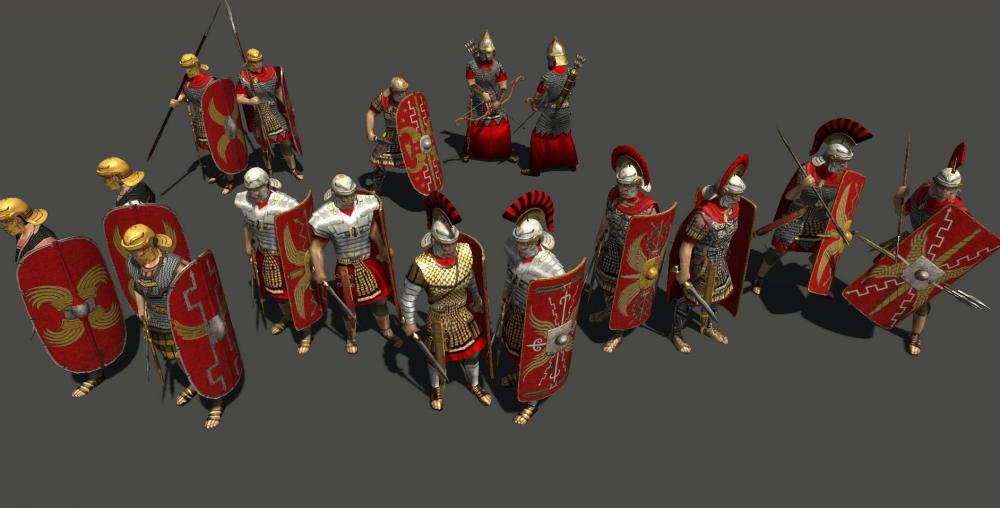 Bigtiger has worked on some gorgeous new elm trees, new poplar trees and improved the flora 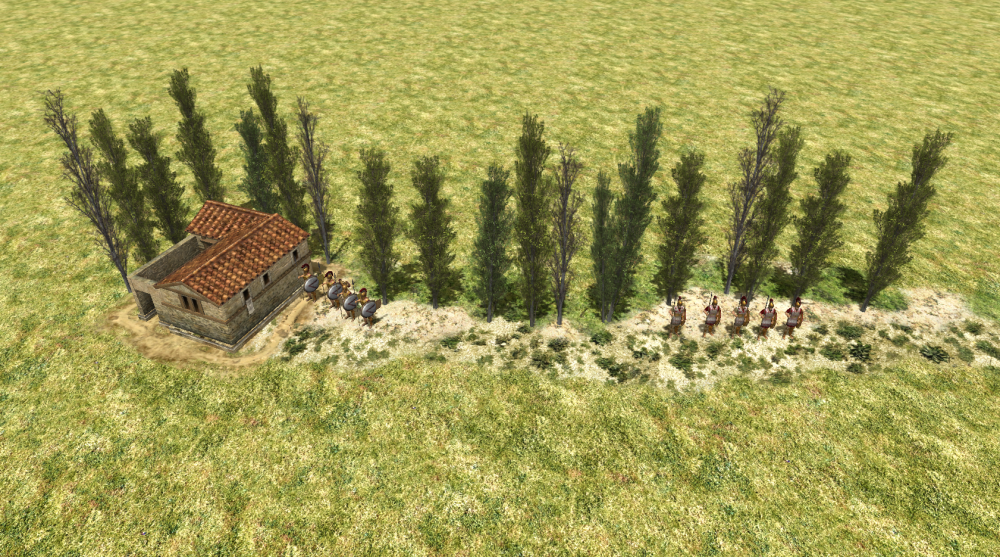 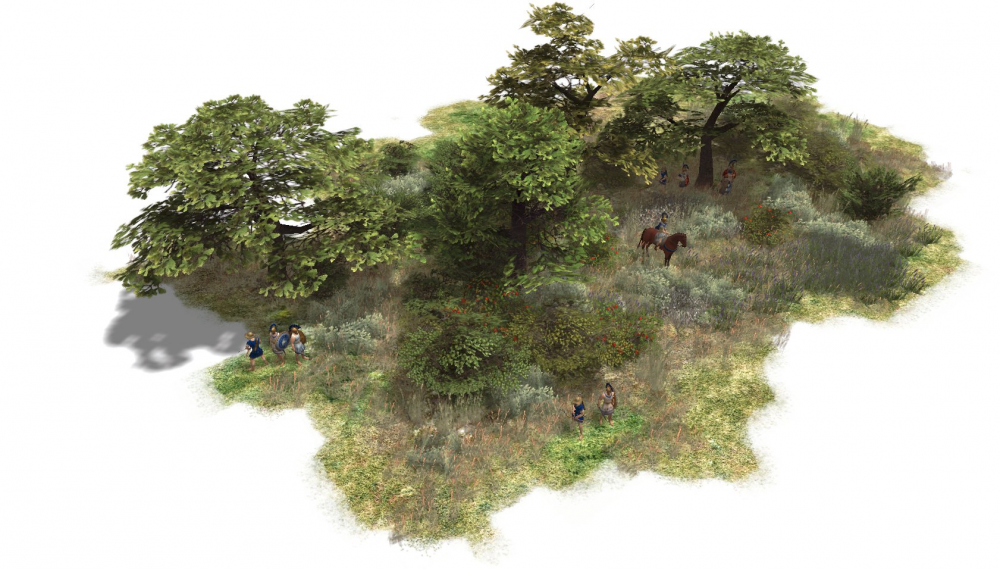 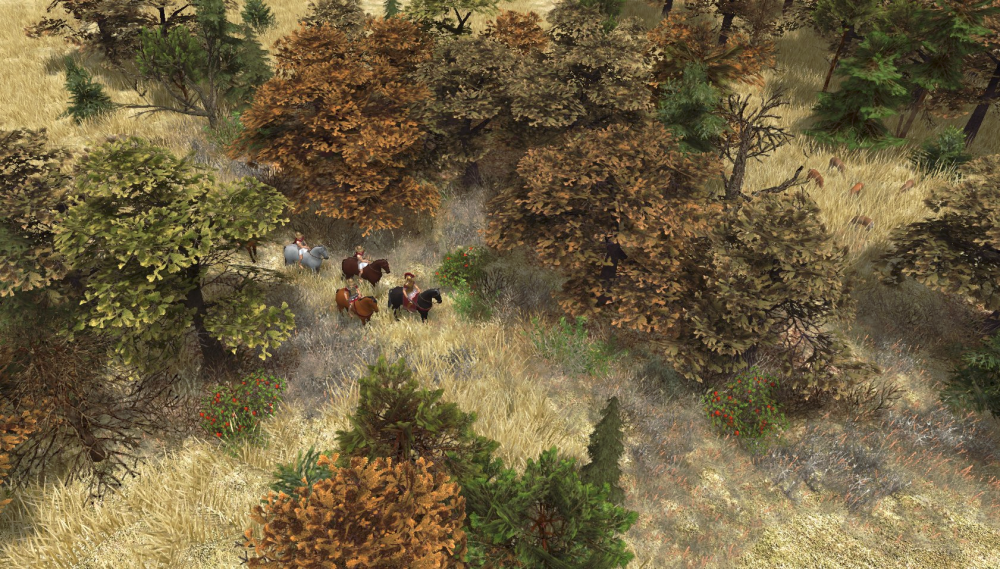 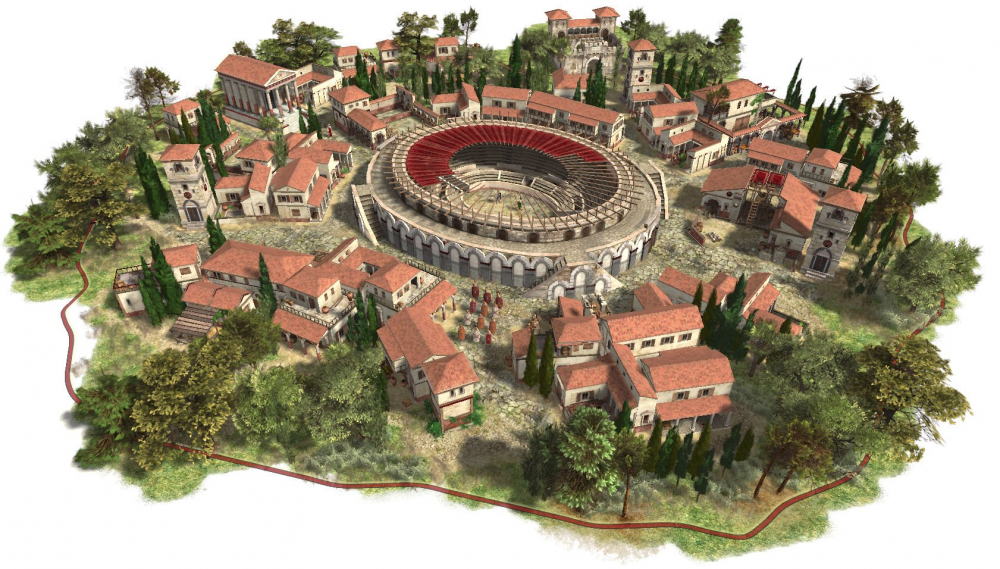 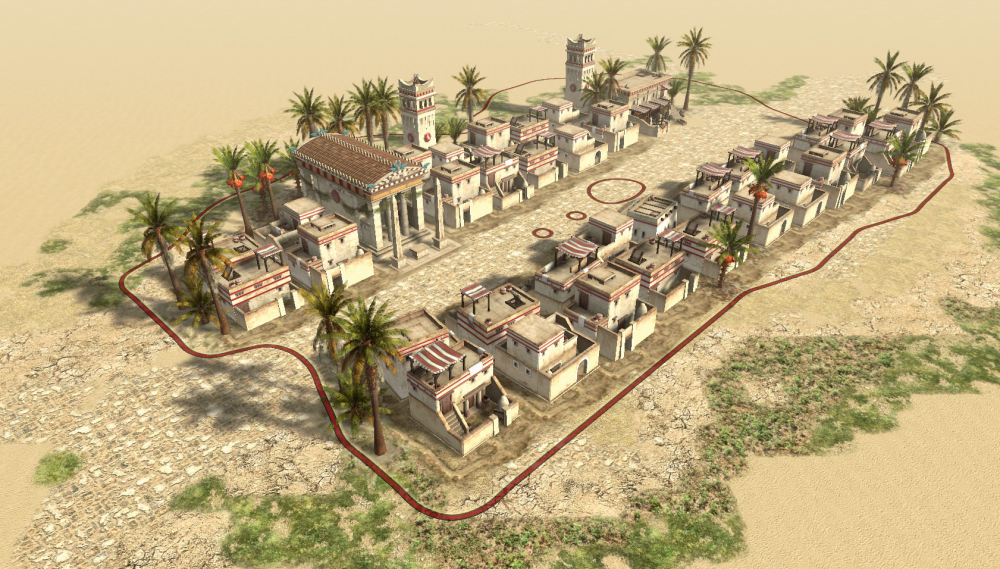 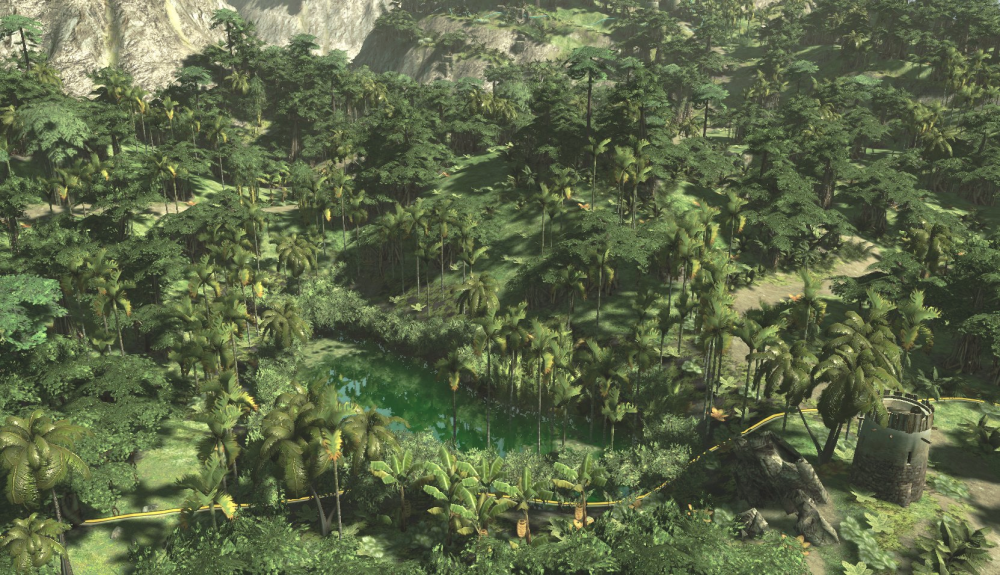 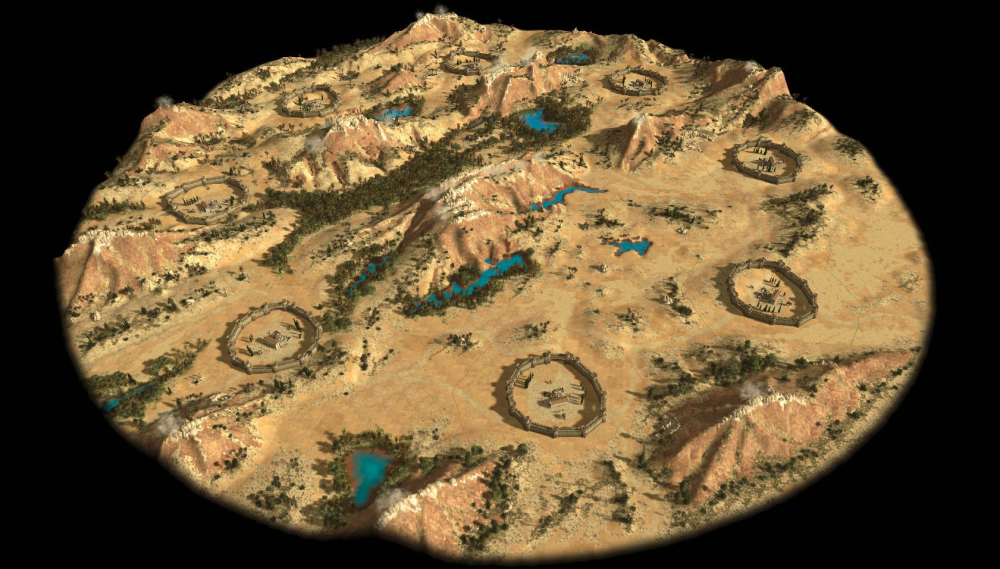 Stan added an orange firefly particle and committed new improved berry bushes by BigTiger. He updated outdated icons and cavalry icons to use the new horse assets. There are now new lavender, new bluefin tuna textures and animations. Lately he has developed new icons for the unit actions and for status effects. He created three textures and icons for bears (polar, black, brown), made two hippopotamuses textures and created a model for the Mausoleum at Halicarnassus. He also replaced the current Gaul wonder by a more historically accurate one: the sanctuary of Corent. 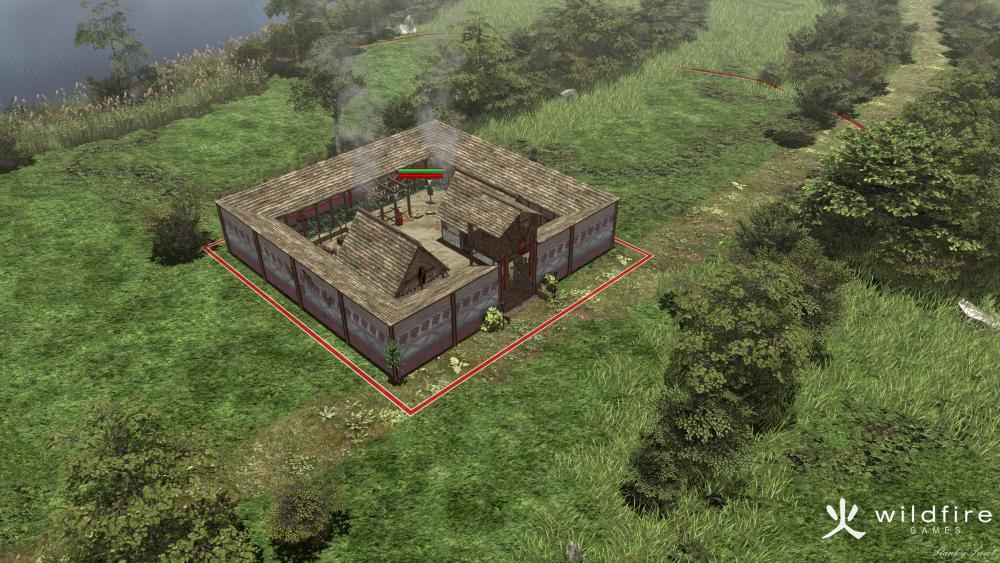 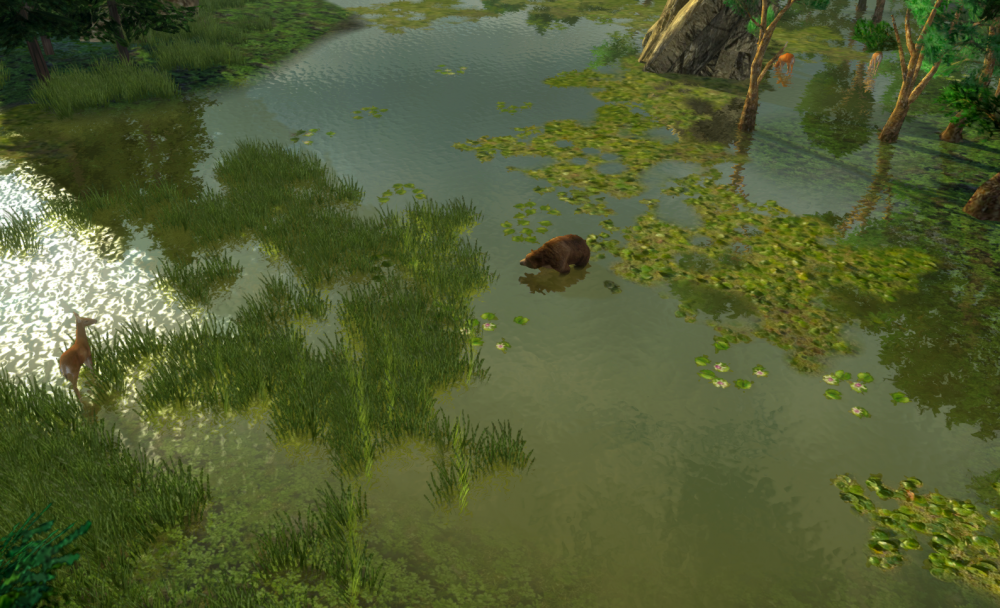 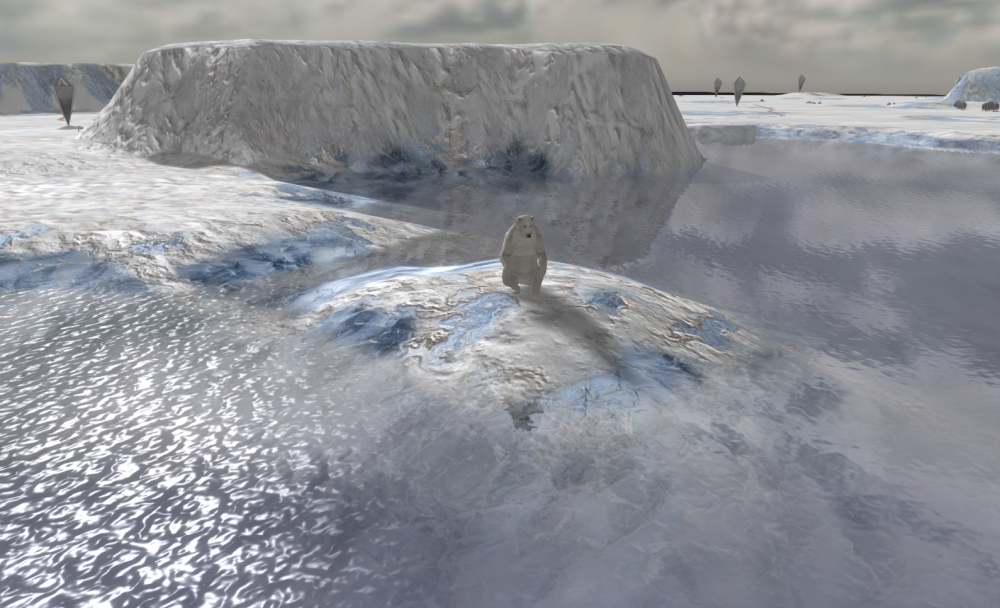 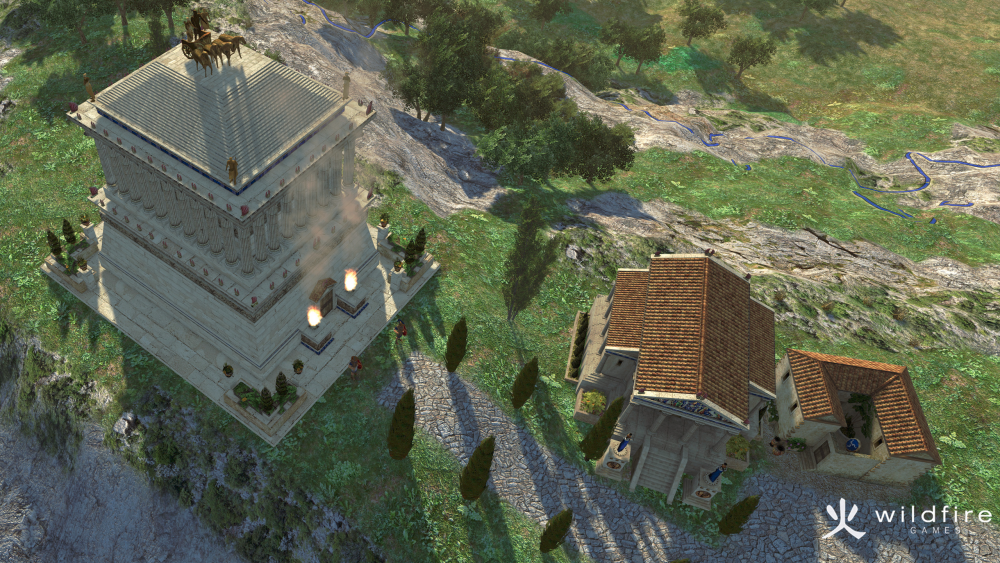 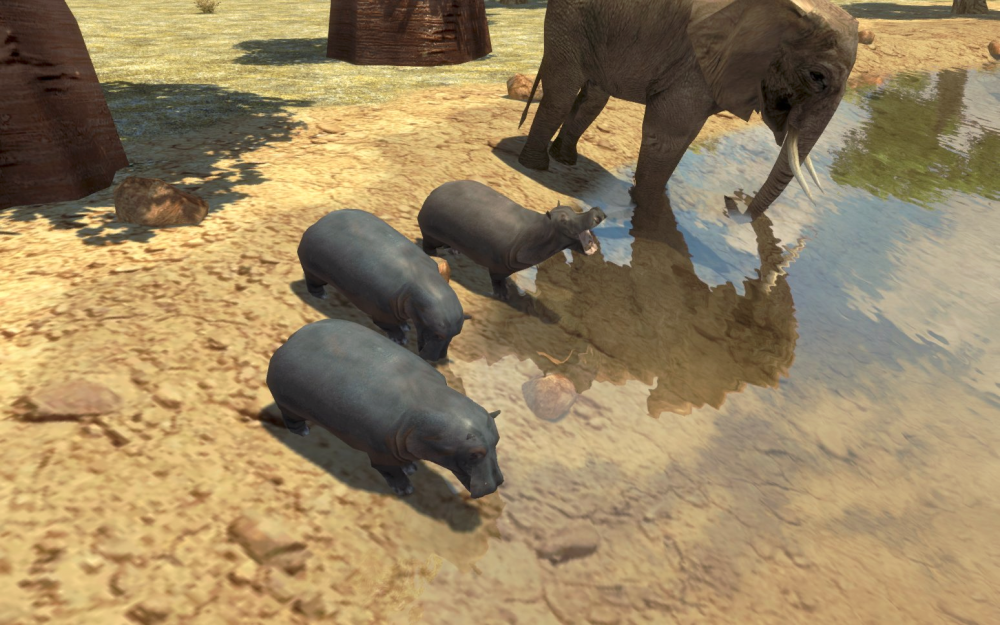 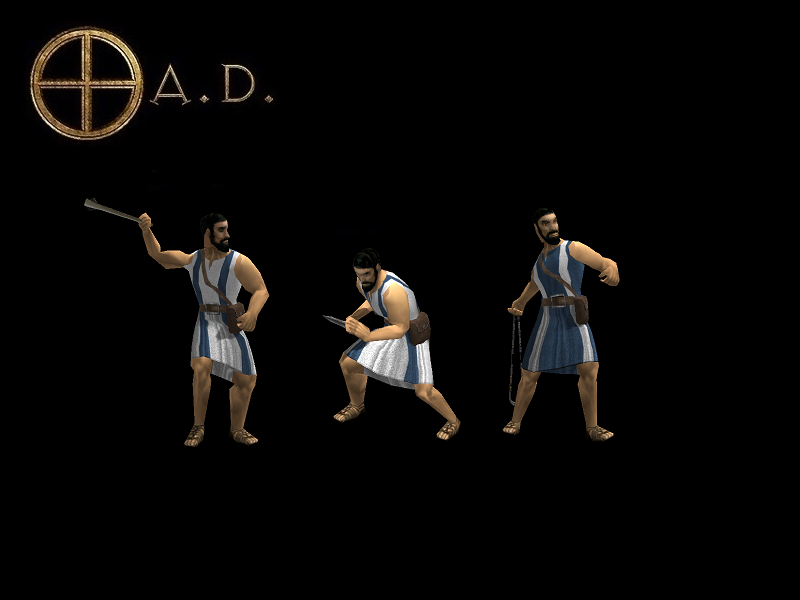 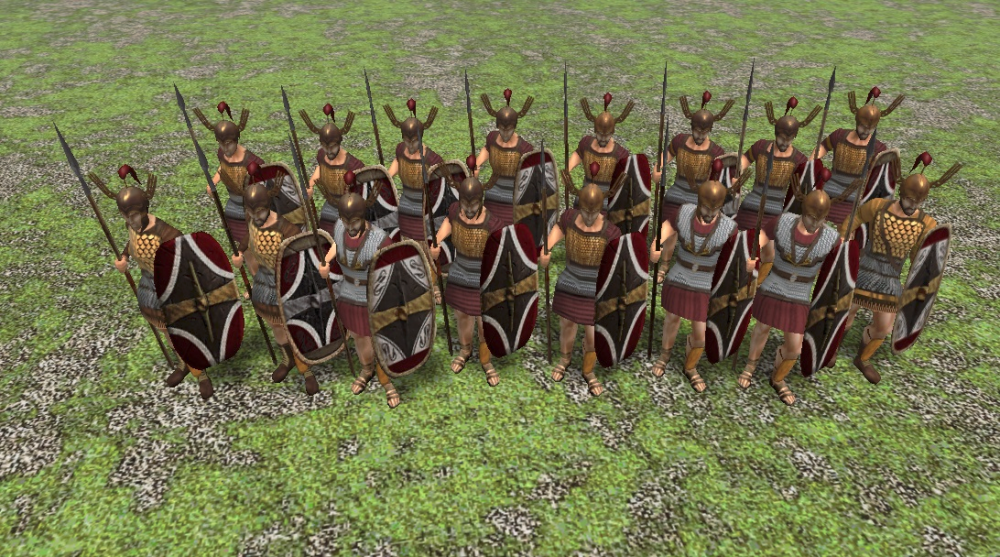 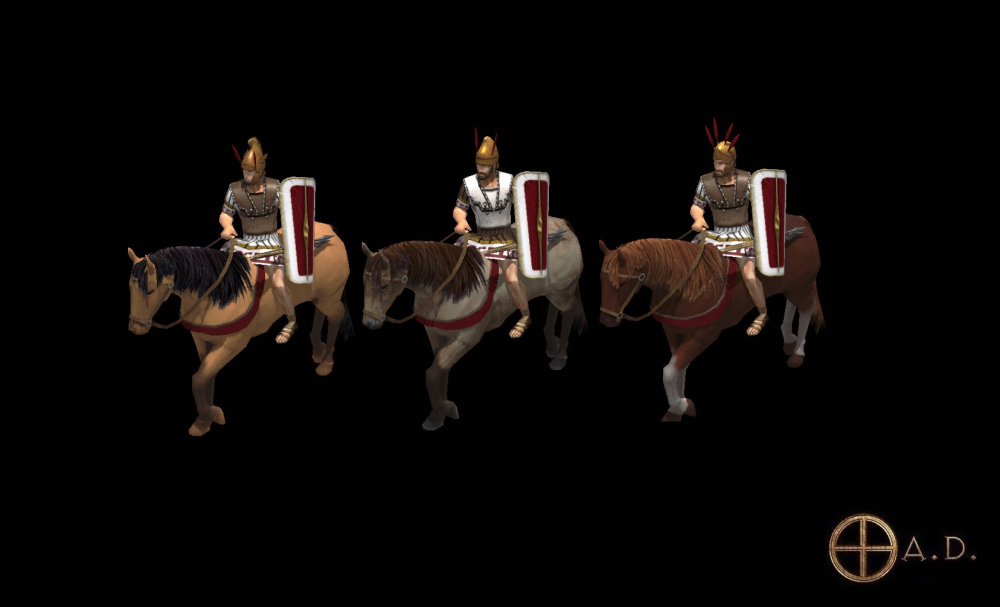 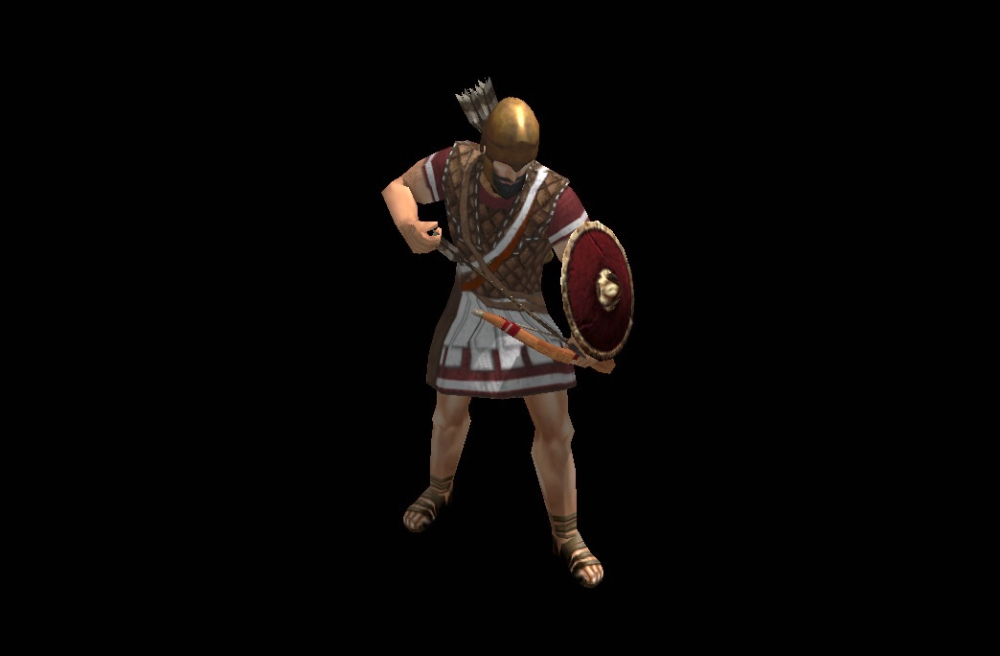 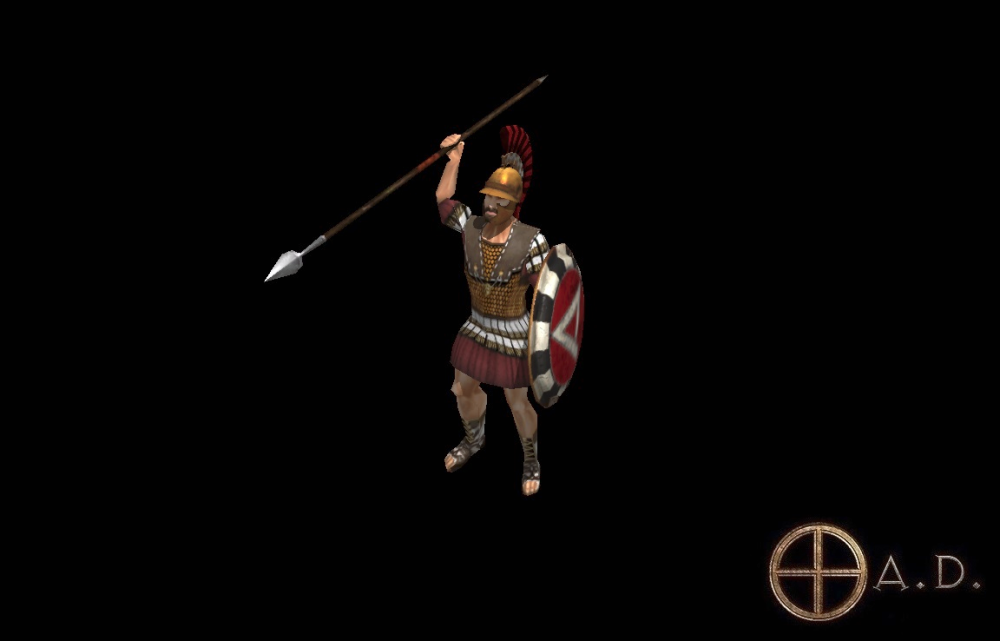 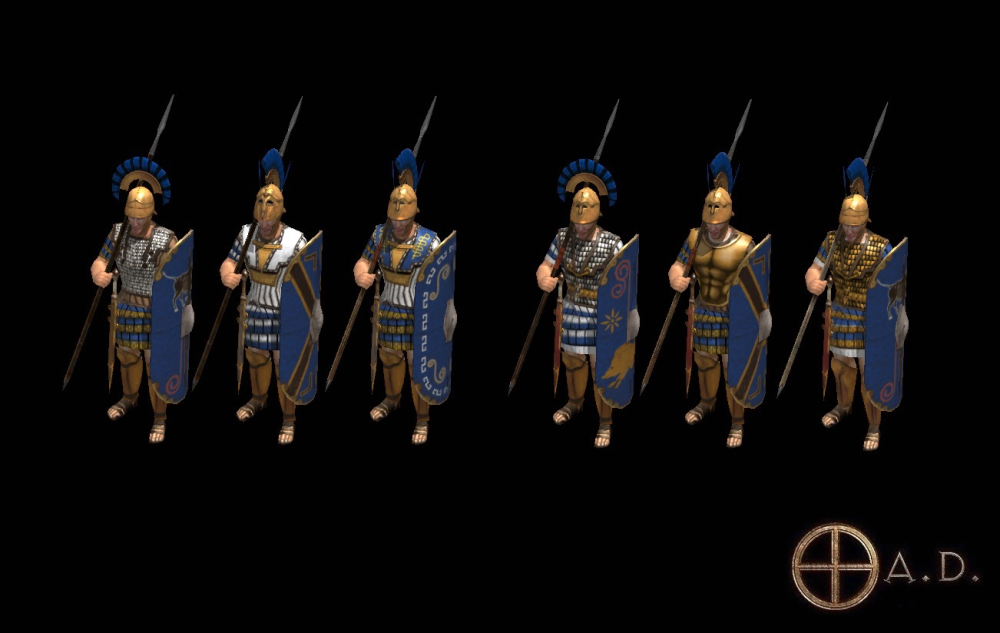 wowgetoffyourcellphone made some Corinthian helmet portraits, worked on some animals portraits and has given feedback on gameplay and icons and has made some of the screenshots in this development report.

Nescio worked with Stockfish, Badosu, ValirAnt, FeldFeld, and borg- to get some gameplay balancing patches, which were committed by other members.

Beau fixed some mistakes in the documentation.²

Beise is currently translating the wiki from English to German.

Nescio has also been updating the English style guide, corrected many templates for consistency, and standardized hero aura descriptions and generalised tooltips.

Jeru made a new financial report and submitted a development report to SPI our financial sponsor. Thank everyone for all the donations. You can see more information about supporting us financially here: https://play0ad.com/community/donate/.

user1 and elexis continue their work moderating in the multiplayer lobby. user1 created a a special thread on the forums to report all issues regarding the lobby.

Freagarach gave a presentation at Sogyo

Stan gave an interview for the Waffling Taylors podcast (https://wafflingtaylors.rocks/). The podcast should be available in June.
He gave an interview with Picasoft (in French – you can find an English transcript here). Picasoft is an association at the UTC (a French school) you can read more about it here.
He also gave a presentation at Avanade
He also held a stand at the  Capitole Du Libre in November  2019. You can find a summary here

vladislavbelov did a presentation in FOSDEM 2020 about graphics pipelines in 0AD. See this thread     for more information.

16 languages have reached more than 90% of translation. If you want to help with your native language head over to  Transifex.

There has been quite a lot of activity on the competitive side! Most of the replays are available on the forums, so you can see some of the best players in action.

HMS-Surprise organized the Sunday pro games tournament 1v1 commentated between 17/01/2019 and 24/11/2019. This was a competitive community event with very nice graphic designs!

Stockfish also organized a multiplayer 0 A.D. tournament called the Primus Pilus tournament from 30/03/2020 to 29/04/2020. HMS-Surprise eventually took over to finish it.

This report was written by asterix with the help of Thorfinn the Shallow Minded, Stan and  Sundiata. For more details, please check  wiki:Alpha24   and the roadmap.

THANK YOU FOR YOUR SUPPORT.