Wildfire Games, the international group of volunteers developing 0 A.D. : Empires Ascendant, is happy to present its latest development report.
If you want to find out more about the development of this open-source, cross-platform real-time strategy game or if you are interested in game development in general, it might provide an interesting read.

If you want to be part of this project, feel free to visit our forums and join our active community, or just grab a task from our list of open tickets and get right to it. We are currently looking for Programmers, Animators and Artists.

wraitii has rewritten UnitMotion for better code and easier extensibility, with the goal in sight of introducing optimisations. He’s optimised the Hierarchical Pathfinder, and is working on pathfinder threading. he has also worked on two patches, allowing triggers to give units modifiers, and making attack effects easily moddable so that, for example, a unit can both capture and damage in the same attack.

Stan` Created a first version of the polycount guidelines and updated the art design document. He also added a glow material that also supports normal maps (basic_glow_norm). Stan` worked on many other fixes and improvements, such adding more animations to the atlas drop down list.

Vladislavbelov continues to work on the renderer among other things, improving the water’s GLSL shader by increasing the reflection and refraction realism. He also added a tool to Atlas, which allows choosing water height by simply clicking on a part of the terrain with the desired height.

Itms worked on our Continuous Integration system, and improved the developing environment for the programmers behind the scenes. He made the move from VS2013 to VS2015 as the default compiler on Windows, with help from Angen. He also upgraded SpiderMonkey to version 45.

s0600204 increased the usage of pkg-config instead of hard-coding or library-specific programs, and added support for special characters (UTF8) in map names and descriptions.

elexis rewrote source/gui/ to have a cleaner code structure and use C++11 features (most code still came from 2004), fixed a number of compiler warnings and some memory leaks.

JoshuaJB fixed some memory leaks introduced by the implementation of STUN + XMPP ICE.

historic_bruno has been working on MacOS build fixes.

trompetin17 fixed an issue with atlasUI and added a “new” checkbox to the map settings tab.

Imarok, FeXoR and bb_ have also been working on various smaller code fixes, improvements and reviews.

Mate-86 has worked on a feature allowing entities to be affected by Status Effects, such as flaming projectiles igniting the target or poisoned arrows poisoning the target, which will cause the target to continue suffering damage for a while.

Freagarach has replaced the gender-tag with phenotype, adding the ability to choose a random phenotype for a given template, allowing for different looks for the same template, as well as having male and female units from the same template with their correct respective voices. Freagarach, with assistance from wraitii, has also wrapped damage types in a Damage element in XML templates to make them generic. This places the damage types in a “Damage” container, just like the “Resources” are. Part of the effort towards having secondary attacks and a more easily moddable game.

Angen made the AI aware of the existence of the new ranges and updated precompiled headers to improve build times.

Krinkle fixed ESLint semicolon-related warnings and has been updating various wiki-pages on trac.

Alexandermb‘s new fauna models and textures were committed by Stan`, including Marwari, Lusitano and Celtic horse breeds, new cattle textures, sanga variants, a new Maurya trader chariot with new animations and he animated the new Kushite hero chariot by Sundiata. He sorted his many new Celtic shields according to their specific civ, diffenrentiating the Gauls and Britons with the help of Genava55. Another big update were the many improvements to a variety of other shields, including the Greek aspis with new higher quality models and textures. And then there was the big Hellenic helmets update: Thracian, Phrygian, Boeotian, Chalcidean, Attic, Bryastovets, Corinthian and the Pilos helmet, with many variations. New meshes and textures for greaves were also committed.

Many other smaller fixes and improvements were made, further enhancing the quality of his already Herculean art contributions, as wel as working on “the great animations re-export” together with Stan` (cleaning and committing) and assisted by fatherbushido and Enrique, in order to solve a flaw in many older meshes, while also taking the opportunity to improve on some of those animations and adding some new ones. Alexandermb has also been working on a number of formations like the testudo, phalanx and syntagma.

Stan` Made a new blacksmith for the Britons, improved the walls for the Gauls and added some detailing to their barracks. He unified foundation sizes and construction dust, added new scaffolds and updated structure templates accordingly.

LordGood is continuing his prolific work in the flora department. Teak, dragon bamboo, strangler figs, bananas, areca palm, doum palm, Atlas cedar, holly oak, juniper tree and some new grasses are his latest additions. He has also been working on the Hellenization of the Ptolemies with a new tower and temple.

Bigtiger has worked on some beautiful new flora as well, adding holm oaks, Euro birch, fir tree and a new fern to the collection. He also made new cliffs, new particle actors for snow and clouds and new temperate terrain textures. These new assets can be admired in three new excellent looking maps by Bigtiger himself: Farmland, Oceanside and Roadway.

wowgetoffyourcellphone made new icons for the deer, boar, camel, horse, walrus and wildebeest. The Uffington White Horse he made back in 2016 will replace Stonehenge as the new wonder for the Britons.

Gallaecio has been improving and correcting the English descriptions in-game.

Stan` gave a presentation on 0 A.D. and it’s develoment process in Rennes for GrafikLabor 2019.

After discussions on the transliteration of Ancient Greek into English, the decission has been made to use the standards of the American Library Association and Library of Congress proposed by Anaxandridas ho Skandiates, who is, in discussion with Nescio, working to update all the Greek specific names, making them more accurate and consitent.

Nescio has also been updating the English style guide, cleaned up the technology data files and applied some corrections to the new horse and cattle fauna templates (among others), added skirmishing templates to some structures and cleaned some obstruction and footprint sizes for others, improved a number of tool tips and improved and corrected some of the Roman and Persian specific names.

HMS-Surprise, Unknown_Player, Feldfeld and psypherium organized the commentated Sunday Pro Games between April and June. This was a competetive community event, with Boudica ranking number 1!

elexis, Stan` and wraitii have been updating an extensive list presenting all noticable changes to the end user in Alpha 24, since development started on December 26th, 2018. Changes include new 3D and 2D art, sound, maps, gameplay, user interface, renderer, pathfinder and more. Check it out at: https://trac.wildfiregames.com/wiki/Alpha24 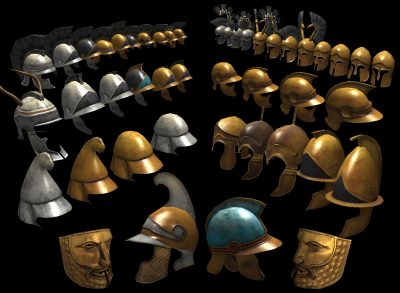 A small selection of Alexandermb’s new helmets with many variants 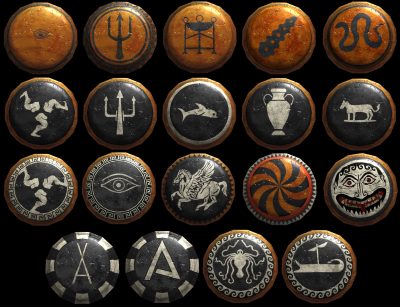 One of many new sets of shields. The Greek aspis for the Athenian faction. From top to bottom: basic, advanced, elite and champion. By Alexandermb 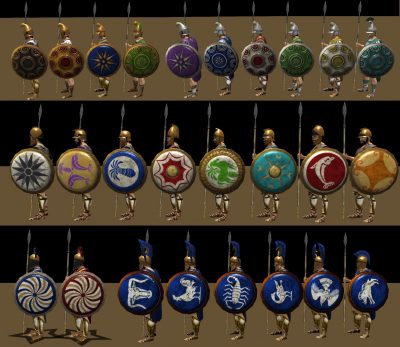 Macedonian, Carthaginian and Spartan units showing off their new equipment, by Alexandermb 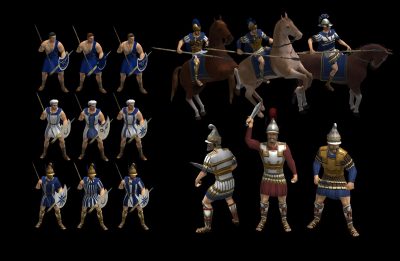 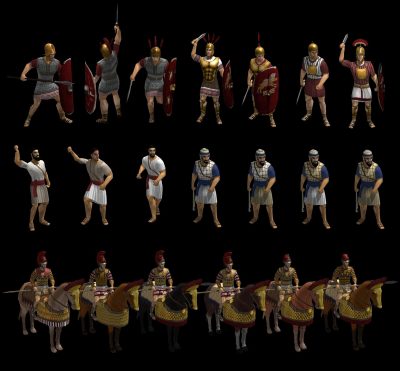 New unit textures for the Romans, Judean Slingers and Seleucid Cataphracts, by wackyserious

Some of the new temperate flora assets by Bigtiger 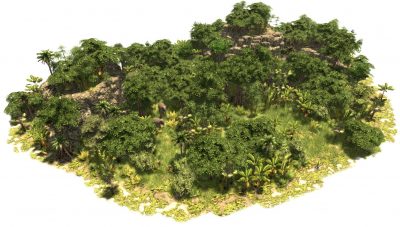 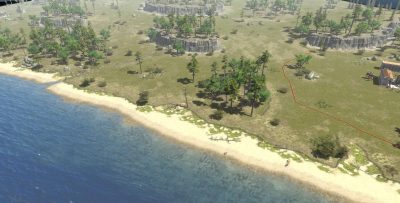 The new Oceanside map by Bigtiger. It’s by the ocean… 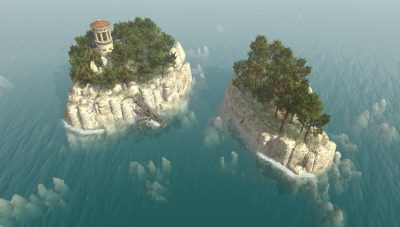 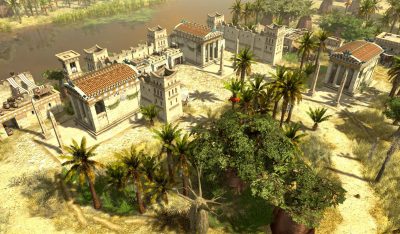 Hellenized Ptolemaic walls and temples on the banks of the Nile. Take note of the new palms and baobab trees