Wildfire Games, the international group of volunteers developing 0 A.D. : Empires Ascendant, is happy to present this monthly development report.
If you want to find out more about the development of this open-source, cross-platform real-time strategy game or if you are interested in game development in general, it might provide an interesting read.

If you want to be part of this project, we urge you to post your application in our forums or just grab a task from our list of open tickets and get right to it. We are currently looking for Gameplay, AI, Sound and Graphics Programmers along with Animators and 3D & texture artists. You prefer to do something else than programming or drawing? Head to our forums and join our active community!

Those who’d like to meet members of the development team and are available this weekend, can join us on FOSDEM: “a free event for software developers to meet, share ideas and collaborate. Every year, thousands of developers of free and open source software from all over the world gather at the event in Brussels“. We’d love to see you there, and maybe grab a beer afterwards!

We are proud to accept temple into the 0 A.D. programming team! May his commits be many and his whitespaces few (C++ joke)!

Itms, our project lead, has been working on a breakage in Jenkins, a tool that helps us ensure code quality by running tests in order to check the code for warnings, and has looked into goodies for FOSDEM (spoiler).

mimo updated the AI to support the new combined victory conditions, among his ongoing improvements to the AI. He has improved the performance of GetEntityState by merging it with GetExtendedEntityState (performance improvement when selecting many units), reported some map errors and reviewed temple’s formation patches.

elexis “I like Vectors” has rewritten a lot of old random map generation code that will allow the player to select the biome on random maps. Other features: River maps are rotated arbitrarily, so that players get a truly unique map generation each time. The game now supports uncapturable Gaia fortifications.

Vladislav reviewed a few patches and returned to working on post-game charts.

Imarok committed a couple of minor GUI fixes. More importantly: he also worked on secure lobby authentication and a mod version test in the lobby (multiplayer).

gallaecio has improved a couple of English strings.

s0600204 worked on the template viewer patch. It is a new dialog that can be opened from the selection panel and structure tree and displays statistics and descriptions about the selected unit or building.

temple worked on unit AI with dropsite distances (e.g. mill, storehouse) and visibility checks, fixed blinking territory and a couple of things with formations. He also fixed dock placement and updated some patches, which are waiting for a review by other programmers. Now he is turning his attention to the diplomacy color patch, together with Elexis, and balance changes for the next alpha release.

LordGood has been working on the building sets. He committed a Ptolemies stable, archery range, workshop & elephant stable and a Roman stable & workshop.

Stan has done some crash reporting and tried to reproduce call stacks, has worked on fixing the soundmanager bug that has been here since r9055 and has committed templates for new heroes. On the art side: he created many new helmets and caps.

Alexandermb, a skillful new artist, has been very active. He has had his new models for horses and spears committed, aside other art improvements like giving siege weapons engineers.

Omri Lahav, our composer, has not been idle in January. So much so that we’ll dedicate a separate development blog to his work of late! Stay tuned!

Dunedan and fpre‘s efforts to help with alpha 23 GUI and lobby patches, both coding and reviewing are greatly appreciated by the team!

wowgetoffyourcellphone contributed new icons for dogs and for cavalry.

Leyto created a Muskox texture, that was committed to the game. 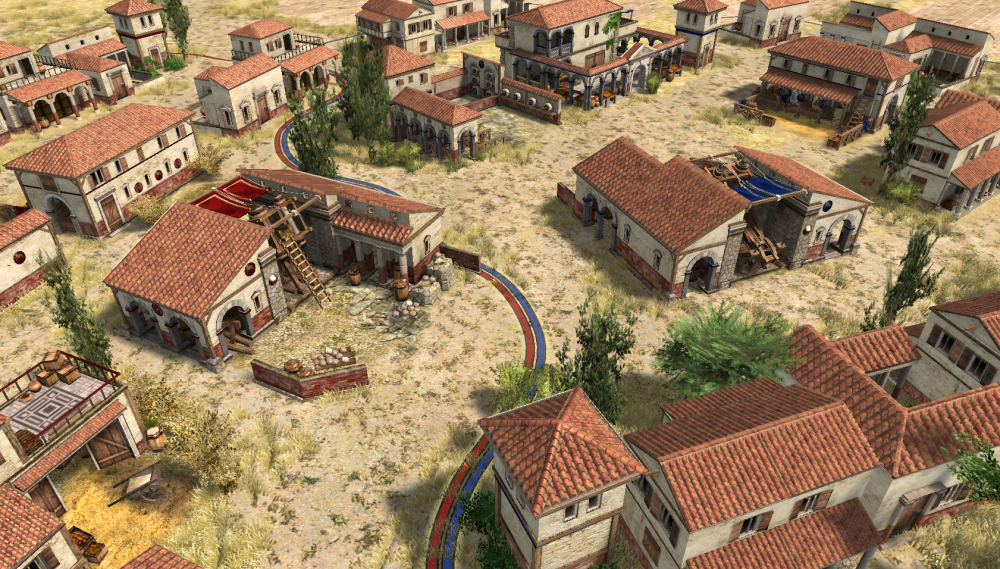