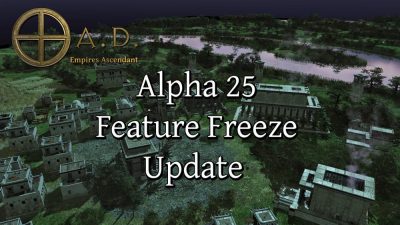 The date of 6th June 2021 at 23.59 CET has been confirmed for the 0 A.D. Alpha 25 Feature Freeze, a major precursor to the actual release of the new alpha version of the game.

What Happens After 6th June?

Want To Be Involved in Pre-Release Testing?

If you’d like to be a part of the critical testing versions of Alpha 25 then please check the thread here;

When Will Alpha 25 Officially be Released?

A provisional date range has been decided upon with June 20th being slated as the earliest possible release date and June 30th. Please be aware this is still provisional at this stage and is entirely reliant on a smooth transition through phases described above, with no major release blocking issues being present in the final tested release candidate.

Final confirmation of the release date will be announced in advance of launch – ideally 3 days to a week prior, as will any postponement and revised timescales in the event of a major issue being discovered.

What Will Alpha 25 Be Named?

A final decision on the naming of the new alpha will be made during the Feature Freeze period, but you still have time to get involved.

Every new iteration of 0 A.D. gets a name and this is your chance to contribute your suggestions. The Alpha 25 Name Suggestions thread on the 0 A.D. Community Forum has been open since January 2021, but there is still time to vote for your favourite and put forward your own suggestions.

0 A.D. release names start with the letter of the alphabet that corresponds to the release version. Alpha 22 was Venustas, Alpha 23 was Ken Wood, Alpha 24 was Xšayaṛša, and Alpha 25 will start with a ‘Y’.

Check out the thread here;